Chakras are the centers of the energy in human beings, they create the connections  between several energy levels, on which people manifest themselves.
Spiritual, mental, emotional and physical.

Chakras are considered to be central places of the energy of life, and form larger and smaller junctions where energy canals meet. 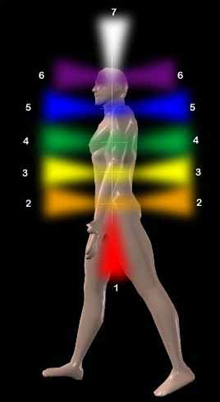 They are receptors, transformers, and dispersers of energy.
Chakras are the connection gateways in which the conscience of people is energetically transformed into the body.
They provide the meridians with energy.

Chaka means “wheel” or “disc.”
They are defined as wheel shaped spirals, in which several levels of conscience cross each other.

Energy is attracted to and is delivered to the body as the chakra rotates, resulting in a continuing exchange of energy.

At the physical level, the chakra corresponds with the nerve intersections of the endocrine glands. All chakras are connected by the most important energy canal, which coils up the spinal column to the crown chakra.